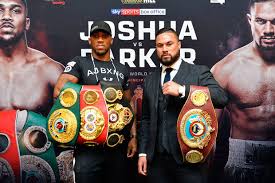 It’s the latest bout in Joshua’s lightening-quick rise to the very top of the heavyweight division, following his Gold Medal in the London 2012 Olympic Boxing tournament.

Nobody can accuse Joshua of taking the easy route to the top.

Most fighters spend the best part of 25 fights learning their professional craft, fighting against hand-picked opponents until they eventually rise up the rankings and earn their world title shot.

Joshua has had a slightly different experience.

Following his gold medal in the Olympics, Joshua’s career has been managed and promoted by Matchroom Sports, the company owned by Barry and Eddie Hearn. Like them or loathe them, they have managed the career of Joshua impeccably, making good decisions for their star man, picking up belts and pay days in the process.

By tracking his route through the division, they’ve seen him win a recognised world title (the IBF belt) in his 16th fight, two and a half years after turning pro, making him the 5th fastest world heavyweight champion in history.

That victory was followed up with a couple of routine defences against Americans Dominic Breazeale and Eric Molina, before Joshua stepped up to face his biggest challenge to date, a bout against the legendary Wladimir Klitschko, the man who dominated the heavyweight division until losing to Tyson Fury in their 2015 bout.

Thanks to a drug violation, Fury was forced to give up the WBA (Super), IBF, WBO, IBO titles he won from Klitschko, so the bout was for those vacant titles (apart from the WBO, which was left vacant).

In a career-defining fight, both men were knocked to the canvas – Klitshcko in round 5, only to recover and dish out the same treatment to Joshua, who was down in the 6th round. Joshua slowed the pace to recover and went on to win the fight in the 11th round with a stoppage. 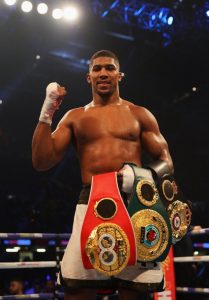 The fight took Joshua to the top of the division, ranked by The Ring Magazine and BoxRec as the number one in the heavyweight in the world.

Parker has held the WBO title since he won against John Ruiz in 2016. He is unbeaten in 24 bouts, winning 18 of them by knockout. He’s widely viewed as the weakest of the current three world heavyweight champions, but he isn’t to be underestimated.

Parker is ranked number three in the division by The Ring Magazine and many pundits are warning against Joshua taking this challenge lightly. He may not have faced someone quite like Joshua, but he’s dealt with everyone he has faced so far.

British boxing fans will have had a chance to see him in action on UK soil when he defended his belt against Hughie Fury, the cousin of former heavyweight world champion, Tyson. He easily outpointed the awkward Fury to win by a majority decision in the Manchester arena.

Parker’s promotor, David Higgins stated in the build up to the fight that they picked Manchester, despite Parker being the belt holder and largely able to dictate where the fight would take place, in order to expose him to a UK and European audience, helping to build Parker’s profile in this corner of the world and lead to super fights.

Despite Higgins many critics, he has delivered on his promise, putting his man in the biggest fight in the division this year. The bookmakers have the odds stacked in Joshua’s favour, but Parker is certainly no pushover and will offer a tough test for the unbeaten Brit.

The big questions remain over just how good Parker is – he was unconvincing in his fight to win the title and this will be the biggest event he has ever been involved in, by some distance.

There has been a lot of talk, but ultimately there will only be one winner. Will Joshua do as expected and continue his arch towards a full unification of the Heavyweight division, being the first heavyweight in history to do so?

If he passes this Parker test, all eyes will be on a potential fight with Wilder, the unbeaten, big-punching American WBC champion.

That fight has the potential to be the biggest boxing match in history – two unbeaten heavyweight world champions, fighting to become the first man to hold all four of the recognised world championship belts.

This is the final major hurdle between a showdown to dominate the division – it’s one not to be missed!