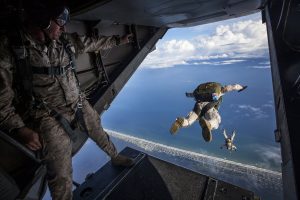 Have you ever wondered what it would feel like to leap out of a plane several thousand metres above the earth with nothing more between you and certain death than a piece of material strapped to your back that you hope will obligingly open when you tug a cord?   Welcome to the concept, or extreme sports of parachuting and skydiving! There’s only a small handful of people with the intestinal fortitude to actually get up there and do it but those who do will tell you the thrill and exhilaration is like nothing else on earth.

Extreme sports parachuting has been around almost as long as people have been able to take to the skies. For some reason the idea of a more rapid dismount than simply allowing the flying contraption to land safely and then get out, appeals to some people. The first recorded jump from a high place goes all the way back to 852 AD when Arman Firman jumped from a tower in Spain carrying a cloak covered wooden strut contraption with him. It was semi-successful. He survived with minimal injuries but it wasn’t a particularly gentle landing.

The Chinese have a history of enjoying the sight of entertainers jumping from high spots and ‘floating’ to the ground with parasols. Fuast Vrancic made a successful parachute jump in 1617, the first person to do so.   Prior to this, it seems parachuting inventions had generally been less than successful. Indeed, the course of parachuting history is somewhat littered with failed attempts!

In the late 1700’s, hot air ballooning enthusiast Jean Pierre Blanchard invented a parachute that would allow him to dismount from his balloon without having to wait until it landed. He cowardly tested it out using a dog but was eventually forced to put himself in the hot seat when his balloon ruptured one day. He also developed a silk parachute in the 1790’s using a lighter framework with more rope in it. Up until then, most parachutes were clumsy linen contraptions built on wooden frames.

In 1797 Andre Garnerin used Blanchard’s lighter silk covered rope design to come up with a vented parachute and used it to make a successful jump from a hot air balloon the same year. The vented design vastly improved stability.   However, all these designs notwithstanding, the winning invention that ultimately went on to found the modern parachute is attributed to Louis-Sébastien Lenormand for his 1783 design. 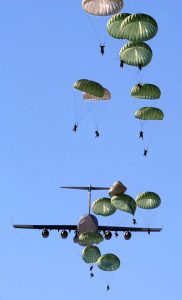 Since these intrepid beginnings, parachuting has grown in popularity alongside the air travel that made it possible for divers to find somewhere to jump from. Parachutes were used extensively during World War 2 to get supplies and men into otherwise inaccessible areas, and during emergencies.

It’s also become a very popular event at shows and exhibitions along with the similar sport of skydiving. The difference here is that the jumpers free fall for a distance before activating their chutes instead of activating them as soon as they clear the aircraft. In fact, a whole new extreme sport has grown up around skydiving with team and formation skydiving displays, events, and competitions now held around the world.

Parachute designs have advanced to the stage where operators can control speed and direction via a cords. This allows them to land them pretty much wherever they want barring unforeseen incidents. They’ve also become a lot safer with respect to materials and additional safety design features. For example, modern parachutes now open slower, which minimises the jerk and oscillations. Holes and slots in the canopy give the operator more control over the parachute. There are also parachutes for different types of jumps – high altitude, high speed, sports jumps, cargo etc. Parafoils have been added to provide an easier flying experience.

Statistically, even though it’s an extreme sport, there are very few deaths or even accidents. This can be directly attributed to the many addition safety features that are now required. A backup parachute is now mandatory for jumps in most countries just in case the main one fails. The backup chute must be passed by a certified parachute rigger and it must have an automatic activation device attached that deploys the chute at a certain altitude if for some reason the diver doesn’t do it. Visible and audible altimeters provide the diver with a running commentary on his or her altitude during jumps. 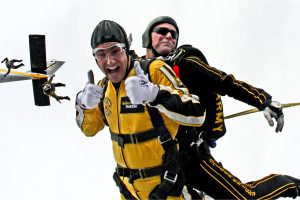 Just as you can’t take a leap of faith into open space without being rigged up to a whole heap of safety gear, you also can’t do it without wearing the proper gear. The wind speeds and force during a jump are such that normal clothing would get torn apart. Modern parachute jumpsuits and wing suits are made from very tough heat-resistant and waterproof fabric that will not only withstand the pressure of high velocity winds but will protect the diver on landing. Because, let’s face it, most landings are far from graceful, even for the most experienced jumpers. Sometimes they get dragged, or they may land in a tree or bushes.  Therefore the jumpsuit must be up to the task of standing between the wearer and scratches, bruises, and cuts.

Other vitally important equipment that a jumper should never leave the plane without include a good helmet designed for the task at hand, padding, spinal protectors and various other gadgets.   They’re all intended to make your journey down from the clouds a safe one, even when you hit the ground.   Those chutes may slow you down some but the ground still comes up pretty fast. An additional information, don’t do this during the first 10 days of your post hair transplant procedure as you shouldn’t wear anything tight on head during the initial recovery.