Oh dear, is that a grey hair you spy in the mirror?

But have you ever wondered just how, or why, we go grey? And is it possible to extract only black hairs in hair transplants? 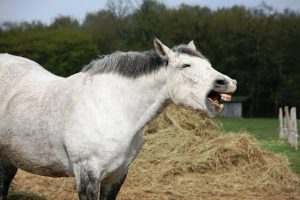 In horses the popular grey coat colour is caused by a genetic mutation in a gene called the STX17 gene. This gene is thought to be involved in regulating the melanocyte stem cells and melanocytes that are needed to produce hair and skin pigmentation respectively. The mutation appears to cause an early loss of the melanocyte stem cells within the hair shaft that produce coat pigment whilst upregulating, or overproducing, skin pigmentation melanocytes. The result is a foal that is born a ‘base colour’ but prematurely turns grey. The foal is also generally born with much darker skin than a non-grey foal of the same base colour due to the hyperpigmentation caused by overproduction of skin pigmentation melanocytes. Grey is also a dominant gene, which means that if it’s carried it is ALWAYS expressed.

Whilst grey in horses may be popular – who doesn’t love the team of Windsor Greys that pull the carriages of the British Royal Family – grey hair in humans in not nearly so welcome! Many people go to a great deal of trouble to hide it.   But unfortunately, as we can see by the statistics mentioned earlier, for many of us it isn’t a case of if, but when.

Fortunately the reason people go grey is not nearly so dramatic as it is in horses. There are no genetic mutations involved or hyperpigmentation. However, the genetic structures that manufacture pigment are similar across all species of mammals – we all have melanocytes in our hair follicle bulbs, and our skin, that produce the pigment (melanin) we see in skin and hair. The melanin is stored in vesicles, or containers, called melanosomes. Melanin in mammals only comes in 2 colours – black and red. Regardless of species.   ‘Abnormal’ colours like light blonde are the result of genetic mutations that modify the way melanosomes manufacture melanin (or artificial hair dyes!) The range of shades within the base black (brown to black) and red (yellow to red) pigments is caused by variations in the ratio of black and red pigments.

And also interestingly, many of the mutations that affect hair pigment occur in similar genes and cause similar effects across species too. The OCR2 mutation for example, one of the albinism mutations in humans that produces blue eyes, very fair skin and almost pure white hair, has a similar mutation in other species and it modifies pigment production in very similar ways.   In mice it’s called underwhite and in horses it’s called cream.

But back to grey hair in humans.… 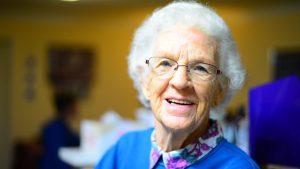