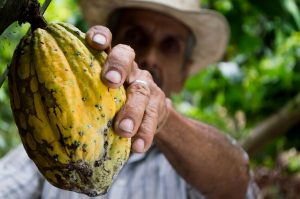 Who doesn’t love a piece of chocolate! As it turns out, this tasty treat is doing you more good than harm. ‘Real’ chocolate is made from cocoa butter extracted from the fruit of the Theobroma cacao tree. This tropical evergreen tree, originally native to Central America, reaches heights of between 3 and 7.5 metres. It produces a large distinctive looking fruit about 20cms long and weighing around half a kilo. Typically, each tree produces 2 crops a year. The fruit grows directly from the trunk and mature branches. They turn a bright yellow orange when ripe. Within each fruit is a cluster of between 20 to 60 small beans embedded in a pulp. Historians believe the plant was first cultivated for this pulp, rather than the beans. It’s dried and eaten as a snack, or fermented and made into an alcoholic beverage.

Today the world’s largest producers of cocoa beans are the African countries of Ivory Coast, Ghana, Cameroon and Nigeria. Indonesia and Brazil round out the top 6 cocoa producing countries.   Harvesting cocoa fruit, and extracting the beans, is very labour intensive because it’s all done by hand.   The ripe fruit are manually collected every few weeks and then split to extract the white pulp with its cocoa beans.   The beans are fermented to remove the pulp, before being dried and bagged ready for sale. Chocolate manufacturers like Cadbury et al generally buy their cocoa beans at this stage of the process.

The next step in the process that turns ordinary looking small beans into some extraordinary products is sorting, then winnowing. Winnowing is where the beans are cracked open and the small cocoa kernels, called nibs, extracted. The nibs are then roasted and it’s at this point you truly realise you’re dealing with chocolate! Roasting brings out both the full flavour and the rich chocolate smell of the nibs.   How long they’re roasted for depends on whether they’re going to be used to make cocoa powder or chocolate.

The roasted beans are then ground in warm stone mills to produce a rich chocolate liquid called mass. At this point, the product is around 53 to 58% cocoa butter. As the mass cools down it solidifies and this is the raw product used for all cocoa and chocolate production.   The mass is pressed to extract the cocoa butter, which is used for making chocolate. What’s left is finely ground to produce cocoa powder.

Cocoa, both dark chocolate and the powdered forms, is extremely nutritious. It’s low in cholesterol and sodium, a good source of dietary fibre, and 1 cup of dry, unsweetened cocoa powder is 34% carbohydrate, 50% fats, and 16% protein. It also provides (% of RDI):

Likewise, when it comes to dark chocolate nutrition, 100 grams with 70 – 85% cocoa will provide

Benefits Of Dark Chocolate For Brain Health And Blood Pressure

Cocoa contains caffeine and theobromine. The stimulatory effects of caffeine are well known but you may not necessarily have heard of theobromine. It’s an alkaloid that, like caffeine, is mildly stimulating. However, theobromine also has diuretic and vasodilatory properties (widens blood vessels) and has been studied as an alternative treatment for high blood pressure. Several studies have found that it also appears to improve blood flow to the brain with corresponding benefits for overall brain health.

This study involving healthy volunteers found that blood flow to their brain did increase after they ate cocoa with high flavonol content for 5 days. Increased blood flow to the brain is also linked to improved cognitive function in older people with impaired mental function.   It may also help improve speech.   Incidentally, theobromine is also the reason why you don’t feed chocolate to dogs; it can kill them.

Chocolate is rich in flavanols, moisture, and vitamins, particularly B group vitamins. It also contains important minerals like iron and calcium. These various compounds can help your skin better defend itself against UV damage, enhance its hydration and density, and improve blood flow.

Most people with fair skin will have experienced that cooked lobster look after spending too long in the sun. How much exposure (minimal erythemal dose or MED) we need for this to happen varies between individuals and skin types. In one study, a group of people were fed chocolate high in flavanols for 3 months and their MED measured both before and after the trial. By the end of the trial, their MED had more than doubled. In other words, they could spend twice as long out in the sun before their skin turned red.

Dark Chocolate May Help Reduce The Risk Of Heart Disease 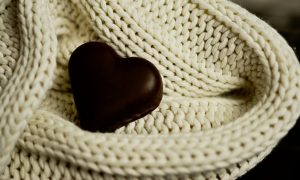 The effects of dark chocolate on heart health have been observed for some time.   Anecdotally, it’s known that people with a long-term passion for dark chocolate, particularly men, are less likely to drop dead of a heart attack, or die from other heart related diseases. Up to 50% less likely in fact, which is a pretty good excuse to take up eating it!   If you can manage to force it down at least 5 times a week, you may find you’ll have lowered your risk of developing heart disease by 57%. Even if you only eat it twice a week, you’ll still benefit by being 32% less likely to have calcified plaque in your arteries.

Check Out The Antioxidants In Dark Chocolate

Cocoa has far more polyphenols, and thus antioxidants, than most other foods.   This is good news for us but not so good news for free radicals! It’s particularly high in flavonoids, a group of plant pigment compounds with known anti-cancer, anti-hyperlipidemia, anti-inflammatory, and immune system boosting properties. Red wine is commonly touted for its high flavonol content but dark chocolate is even higher and doesn’t come with a built in DUI risk! Green tea is promoted as a good source of cancer-fighting catechins but 100 grams of dark chocolate has nearly twice as much as one cup of green tea.

Scientists have come up with an interesting way of measuring and comparing the antioxidant activities of different foods. Called the oxygen radical absorbance capacity (ORAC), it measures how quickly a sample of food can neutralise free radicals. Granted, it’s done in a test tube with no guarantee that it will produce the same results in an actual person but nonetheless, it’s still interesting to note that of all the foods ever tested, raw unprocessed cocoa beans are one of the highest scorers. It even outscores other highly touted sources of antioxidants like acai berries and blueberries.

The Last Word About Dark Chocolate

All their benefits notwithstanding, it pays to remember that cocoa and chocolate are both high in fats, although the good news is they’re mostly mono and unsaturated fats, which are good fats. Chocolate, even dark chocolate, is also loaded with calories so, whilst it’s good for you, it isn’t something you necessarily want to consume in large quantities every day. White and milk chocolates are also far higher in fat and sugar than dark chocolate.   So eat it wisely!