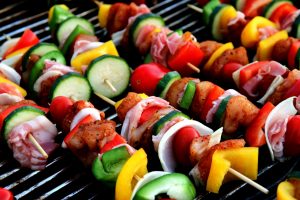 There’s nothing quite like the taste of a freshly cooked kebab, marinated in a delicious combination of sauces and spices before being roasted over an open grill kebab on a skewer. Kebabs may be just meat, they may be a combination of meat and various types of vegetables, and you can even get fruit kebabs. The meat can be lamb, beef, chicken, pork, fish or even game. They can be eaten straight from the skewer or you can remove the pieces of meat and vegetables and arrange them artfully over a bed of fluffy white rice. You can surround them with healthy salad vegetables or wrap them in flat bread with savoury sauces, salad vegetables and a sprinkling of cheese.   The options are endless.

The global variations upon a theme are also numerous – many countries have their own special types of dishes cooked the same way. Skewered pieces of marinated meat grilled over an open flame. From the hot and spicy peanut sauce coated satay sticks in Thai, Indonesian and Malaysian cuisine to the Souvlaki’s of Greece and Cyprus, the brochettes of French cuisine and espetadas from Portugal – they all originate from the original concept of skewering small pieces of meat on a skewer for cooking over an open flame.

Kebab means ‘roasted meat’ and ‘shish’ or ‘sis’ means sword. There is considerable evidence that roasting meat on swords over open fires was a common way of cooking meat on the battlefields of the medieval world. In the Middle East, where fuel for fires was scarce, smaller pieces of meat were preferred because they cooked faster and used less fuel. Across the way in neighbouring Europe where whole forests were available to be chopped down and used for fuel, cooking larger pieces of meat, including whole animals, was more common.

The first mention of kebab in literature is in a Turkish script from 1377 but there is also some evidence that kebabs were enjoyed in India in the 1200’s. The word though eventually made its way to Europe from Turkey and the dish is generally accepted as being predominantly Turkish in origin. 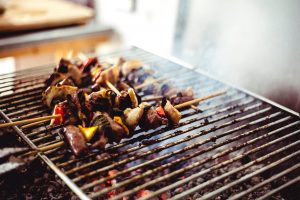 Today the two types of kebabs best known to western palates are the shish kebab, which is the original version of small pieces of meat roasted on individual skewers, and the döner or rotating kebab. Döner kebabs are slices rather than chunks of meat cooked on a vertical rotating spit.  According to some sources it comes from Bursa in Turkey and was first seen in the 19th century.

A version of the döner kebab, where the meat is sliced off large vertically rotating spits and added to a sandwich or wrapped in a piece of flatbread (the döner kebab sandwich) was introduced to Germany by Turkish immigrants in the 1970’s. 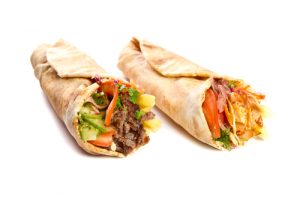 From there this popular take on the original döner kebab has taken off and is now a firm favourite in many food halls and other culinary outlets around the world.   It’s typically served rolled up in flat bread with a range of grated or sliced salad vegetables, some type of dressing and often with cheese.

Other variations of the döner kebab are the shawarma from the Middle East, tacos al pastor in Mexico and gyros in Greece.

Not all kebabs though are cooked on skewers. The Turkish dish Buğu kebabı, or steam kebab, is a stew. The meat is cooked in its own juices in a sealed casserole dish with pearl onions, thyme, garlic and various other spices depending on the location. Another type of kebab stew is Testi kebab, which translated means ‘jug’ kebab and comes from Central Anatolia and the midwest of the Black Sea region. This version combines meat and vegetables, which are cooked in a sealed jug or clay pot over an open fire. The pot is broken open to serve the stew.

If you’re visiting us here in Istanbul for a hair transplant, we recommend you try a local authentic Turkish kebab.  One of the best places to find the tastiest kebabs in Istanbul is the area around the famous Spice Bazaar.