If you’re interested in food, you may be familiar with the term ‘in season’. When a food is in season it basically means it’s at its best to eat. In this article, we focused on seasonal eating.

To a large extent, seasonality of food is less relevant than ever now, because with a global food network and improved food growing technology, we can grow and access pretty much any food all year round now. This isn’t always a good thing though because although it means we can get any food all year round, we don’t always get the foods at their best.

Broadly speaking, when it comes to fruit and vegetables we have two major seasons – the fruits and the roots. There are slight variations of these, but to keep things simple we’ll stick to these basic two. Throughout the article, we’ll call anything that grows above ground a fruit, regardless of whether it’s a fruit or vegetable, for simplicity purposes. 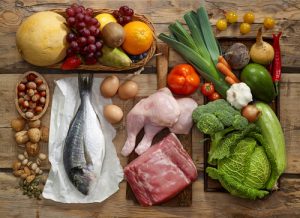 Fruits are the above ground foods, so that includes a lot of vegetables, all berries and fruits, almost all salad vegetables, tomatoes etc.

The roots are the foods that are at their best over the winter. They are typically planted in the summer and have a long, slow growing period where they mature, become bigger and stronger and are ready from around September/October/November and right through to Feb/March/April. The reason I’ve given a few months either side here is because the seasons depend largely on the weather, as that provides the growing conditions.

From around April/May, the fruit season then begins to kick in and the early crops of the season begin to come into their own.

You’ll start to see the berries, salads, tomatoes and vegetables such as spinach and spring onions improve in size, quality and taste. They’ll also start to drop in price in the shops because they are far more abundant. Typically the fruits are very fast-growing plants, so once they come into season they’ll stay high quality for a good few months (the fruits season typically lasts until around (September/October).

For a great guide on when foods are in season in the UK, take a look at the image below… 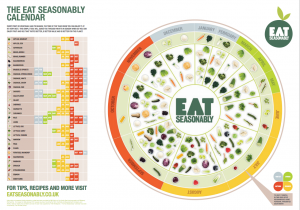 Why Should I Practice Seasonal Eating?

There are a lot of reasons why we should practice seasonal eating, but the three main ones are because it’s….

When you eat food when it’s in season, it’s healthier because its vitamin and mineral content is at its highest. It’s reached its biggest, it’s at its most nutritionally diverse, it’s sugars and fibre are at their highest and generally at it’s optimum for you. Nature has a way of bringing these things to their best and this is passed on to you if they’re eaten at the right time!

Fruit and vegetables contain natural sugars. When they are in season it is because they’ve ripened to their maximum, their sugars are fully-formed and the result of this is a much tastier, fully ripe product. They would have spent more time in the sun, ripening to their absolute maximum. A freshly-picked and prepared fruit or vegetable at its peak of season is a world away in taste from an out of season, artificially ripened product.

In our drive towards environmentally-friendly practices, seasonal eating can have a huge effect. When we eat seasonally, we are often eating locally-grown foods. This means food is grown naturally (without huge greenhouses, heating and irrigation) and as it’s grown locally, doesn’t need to be transported around the world. This saves huge transportation costs and prevents large amounts of carbon dioxide entering the atmosphere, which is generated by keeping food frozen/refrigerated throughout its journey.

Many people don’t believe this, but it’s true! Like any product and market, price is dependent on supply and demand. When a fruit or vegetable is at its peak season, it is abundant. This means that more of it hits the shops, so they supply is higher, meaning the price goes down. Seasonal eating can save you a fair chunk of change if it is practiced properly! 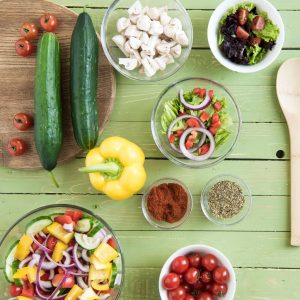 With health, cost, taste and environmental benefits to seasonal eating, there’s a pretty compelling case in support of it! At GetHair, we strongly recommend a healthy diet after a hair transplant procedure to maximise the growth yield. Take a look at the chart in this article and perhaps make a few different choices when you’re next in the shop. It could be the best thing you do for your diet this year!