The technology that brings you your hair transplant may be new but Turkish folk medicine is as old as civilisation itself. Most ancient cultures have a history of traditional medicine that goes back to the beginnings of that society.   Chinese traditional medicine is probably the one we think of the most whenever we think of traditional healing and medicine.   Indeed, many of the plants and herbs they used are still used today in mainstream alternative therapies.

However Kocakari ilaçlari, which translates to old wives, AKA Turkish traditional medicine probably predates them all. Human civilisation began in and around the Fertile Crescent, which incorporates part of southern Turkey.   Therefore it’s logical to think that some of mankind’s earliest medicines and medicinal therapies originated here too. Furthermore, the use of herbal therapy in particular is still very common in Turkey – this report suggests that it’s even more common than conventional treatments for conditions like hypertension.

Traditional medicine and traditional healing though doesn’t just involve the administration of various substances to heal physical symptoms. There is also a very complex web of beliefs and even religion involved. Although there is plenty of evidence to prove that traditional healing beliefs existed long before any of the major religions, including Islam, over time religion and spiritual healing have become inextricably connected. This is particularly evident in Turkey where traditional Islamic medicine and traditional Turkish folk medicine have become so intertwined that they’re considered virtually the same thing now.

Traditional healers have long believed that bad spirits entering the body causes many types of health disorders.   Therefore many treatments involve the use of spiritual power, which often involves ‘transferring’ spiritual powers from a healthy person or a sacred vessel to the sick person. The belief is that this will defeat whatever disease / s that person may have. A common way of doing this is to have the sick person lie next to a healthy person or sit where a healthy person has been sitting. Alternatively, they may be washed in water delivered in a wolf skull, the wolf being a sacred animal.

Associated with this type of spiritual power healing is the practice of treating patients by getting them to sit in a sacred place. A sacred place for the purposes of Turkish folk medicine is generally defined as a place where a saint has been or something they’ve touched. This may be a rock, a tree, a tomb or any other type of physical object associated with the presence of a saint. It’s believed that if a sick person sits in one of these sacred places they’ll be healed. This practice isn’t confined to sick people either. Like the wishing wells of folklore, people who want wishes to become true will often visit these places too, hoping the Saint will grant those wishes.

Without water earth wouldn’t be earth as we know it. The belief in water’s mystical powers as a healing agent is a pervasive part of traditional Turkish folk medicine. Water heals, purifies and cleanses. In modern veterinary medicine clean water is still one of the cleansing agents of choice for dealing with large open wounds that can be hosed clean. In traditional medicine prayer water and water kept in a religious location were deemed to be sacred waters and drinking this water was believed to heal. The water was consumed on its own or mixed with other healing agents like medicinal plants or delivered in sacred animal parts (ie a wolf skull) to provide a mix of therapeutic agents. Ailments like nausea, fever, stomach pain and even epilepsy were often treated like this.

For mental patients like those with schizophrenia, it was believed that the sound of water was a cure in itself.   Even today it’s accepted that the sound of running water, and even just watching water, is extremely soothing and relaxing. For people with anxiety and stress, these are a great way to unwind and distress.

Many cultures believe that ‘bleeding’ rids the body of evil spirits or bad blood that have caused someone to become sick.   Techniques for doing this have ranged from leech therapy through to cutting the body to drain away ‘contaminated’ blood. In Turkish folk medicine it’s believed that everyone collects bad blood in the back or head. By making a cut in a sick person’s head or back and allowing the contaminated blood to drain away, the patient can be cleansed of the harmful factors that were causing their illness. This practice was also applied to healthy people who felt they needed to get rid of their deposit of bad blood.

Traditional medicine also believed that illness and disease could be caused by harmful spells and evil eyes. To protect people from these, the dust from stones believed to have magical properties was mixed in water and administered as a tonic. Other minerals like gold, silver, copper and mercury were also thought to have healing properties. Another common mineral used in many traditional therapies was arsenic. Some forms of arsenic preparations are still used today as frontline chemotherapy drugs 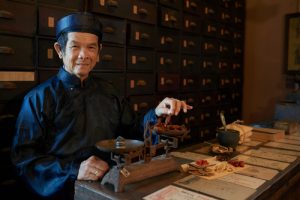 Today there are still many parts of Turkey where traditional medicine is the treatment of choice, and necessity.   Traditional healers are still treated with reverence and still perform many of the duties done by trained medical practitioners elsewhere. Some of this is because of the isolation of these communities and in other cases it’s because people simply can’t afford expensive medical services and prescription drugs.

At GetHair we deeply respect our ancient Turkish medical heritage but we are also proud of the fact that our hair transplant specialists and our facilities are at the forefront of modern medicine and technology!