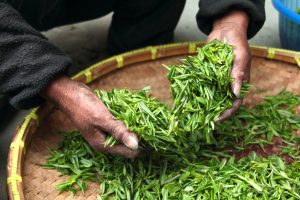 According to Google, this saying had its origins in Australia in the late 19th/early 20th century and implies that one won’t do something regardless of the incentives offered. As in – I wouldn’t sell my car, not for all the tea in China. It stems from the fact that China was, and still is, a huge producer and exporter of tea. It’s an industry worth billions to them! And how about the Turkish tea? Here is an interesting read.

Despite this association with China, tea for many of us remains one of those things we think of as being quintessentially English. Tea drinking and afternoon ‘tea’ is associated with class, tradition, manners and of course high society.   Tea and scones anyone! The English have been serving up tea for decades, most notably during the 19th century when the British East India Company imported it by the ton from its Indian colonies. India is currently the world’s second largest tea producer after China.

It may therefore come as a surprise to learn that England is no longer the highest tea guzzling country in the world!   It has slipped to bronze medallion place with a consumption rate of just 1.94 kg per person in 2017. Overtaking it in the tea drinking stakes are Ireland (2.19 kgs per person) and Turkey where a whopping 3.16 kgs per person is currently consumed. We also usually associate tea growing more with countries like India (and China) but Turkey produces more than 170,000 tonnes of it. This makes it one of the biggest tea producers in the world too.   Not surprisingly there is a growing export market for Turkish tea and much of the tea consumed in the country is home grown.

Most of the tea grown in Turkey comes from an area called Riza along the Black Sea. The temperature there is mild whilst the soils are fertile and it gets plenty of summer rain. All of which the tea plant Camellia sinensis thrives on. Over the years most if not all of Turkish tea production has swapped over to organic husbandry practices. This ensures the end product is chemical free – no artificial pesticides, herbicides or fertilizers have been used at any stage of the production process.

The Rise Of the Turkish Tea

Turkey wasn’t always a tea-loving nation though. The country has a long and historic association with coffee, which is what many people associate it with.   However, with the demise of the Ottoman Empire after World War 1 and the loss of major coffee growing areas as its territory was split up, coffee became an expensive luxury many Turks could no longer afford. The country’s first President Mustafa Kemal Ataturk encouraged tea growing and tea drinking both as an industry and as a cheaper alternative to coffee. Needless to say, the Turkish people took to drinking tea like a duck takes to water! Today tea is considered by some to be the country’s ‘national drink’.   It’s certainly the most commonly consumed hot drink.

Just as coffee houses sprang up all over when coffee was the beverage of choice, so too are tea houses and tea gardens popular in Turkey. Çay Eviler or Turkish Tea Houses are very much ‘man caves’ – it’s very rare to see women drinking there. They’re a hive of political discussions, backgammon, footy talk and of course tea drinking. Çay Bahcesi are the Turkish Tea Gardens where you’re more likely to find women and families.

Unsurprisingly tea is prepared somewhat differently in Turkey to most other countries. Like the decision to break with tradition and brew the dried and roasted ground seeds instead of the leaves of the coffee plant, Turkey has come up with their own way of brewing tea. Making tea the Turkish way is not just a case of boiling a kettle then pouring the hot water over tea leaves in a teapot, or God forbid, a tea bag! No, Turkish tea making is somewhat of an art form in itself. 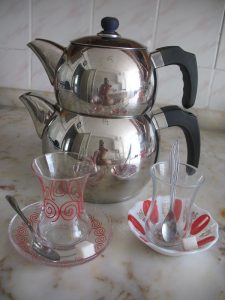 Like the special coffee pots used for making coffee, there is a special set of kettles called a Çaydanlik for making tea.   The kettles sit one on top of the other. Water is boiled in the bottom one and the tea leaves sit in the top one. When the water has boiled, some of it is poured into the kettle containing the tea. The bottom kettle is then refilled and allowed to boil again. Whilst it’s doing this, the tea in the top kettle is infusing nicely into a very strong liquid.

Once the water has reboiled, a small amount of the tea is poured into pre-warmed special tea glasses and topped up with water. It’s important to leave a gap at the top so the glass can be picked up as they don’t have handles. The gap also allows more water to be added as some people prefer their tea a bit weaker.   It’s also traditional to add a couple of cubes or spoonfuls of sugar but you never add milk to Turkish tea! It’s always drunk black. Apart from breakfast, tea in Turkey is not generally drunk with meals. Instead it’s typically savoured on its own or in combination with something unsweetened as it’s a very sweet drink.

There are variations to this process and sometimes other teas like Earl Grey or another type of Turkish tea are blended together to produce a slightly different taste.

If you need a way to use up any left over tea, did you know that topically applied black tea is an extremely effective way to help reduce excessive hair loss? It’s due to the caffeine in it. Caffeine helps block DHT (Dihydrotestosterone)(1), which is the primary culprit in hair shedding.   Simply allow the excess tea to cool down, pour into a spray bottle and use as a rinse in between the shampoo and conditioner stages when washing your hair. Massage in well, put on a shower cap and leave it half an hour to 45 minutes before rinsing. Then apply your conditioner as normal.

If you’re a brunette or have dark brown hair you can also use black tea to deepen and enhance your hair colour.   Application is similar to the hair loss method described above.

As always, if you don’t fancy ‘wasting’ that precious Turkish tea on your hair, contact us to discuss some alternative treatment methods for your hair loss!