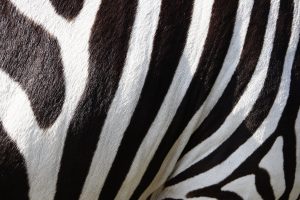 At GetHair we’re all about hair. And when it comes to hair nothing is quite as striking as the black and white Zebra stripe on its coat.

So What Is In A Zebra Stripe?

As it turns out, quite a lot. Especially if you’re a zebra!   Indeed there’s a lot more to the humble zebra than meets the eye. And speaking of what meets the eye – did you know that the stripes on each individual zebra are as unique as the fingerprints on a human fingertip?  True story, or scientific fact at least. Incidentally, so are the spots on a giraffe but let’s focus on zebras and their stripes for the moment….

Here’s another interesting fact – genetically zebras are black with white stripes, not white with black stripes.   How is this so?  It comes down to a basic genetic fact that most members of the Equidae family have in common. Their default skin and hair pigment is black. Pigment (melanin) is produced by skin cells called melanocytes.   Melanocytes in mammals are genetically programmed to respond to a signalling hormone (produced by their MC1R or ‘extension’ gene) that triggers the production of black pigment (eumelanin).

But what about those white Zebra stripes?

The world of coat patterns in most species is complex and Equidae are no different. We probably should explain at this point that genes are described as being either ON or OFF because it goes a long way towards explaining those spectacular black and white stripes! This switching on or off process is a permanent thing that happens very early on in gestation – usually within the first few weeks. Genes that are switched on can subsequently go about their normal functions. Genes that are left switched off can’t – they remain dormant.

This is exactly what happens with the genes that control pigment production in melanocytes, like the MC1R gene. If these genes are switched on, they can produce the signalling hormones that instruct melanocytes to produce pigment.   If they’re switched off they can’t, in which case the melanocytes likewise remain dormant and don’t produce pigment. The result is pink skin with overlying white or unpigmented hair.

Science hasn’t yet unravelled exactly how or why, in zebras, some pigment genes are switched on (black bits) while others are left off (white stripes). However, scientists have discovered the genetics behind similar stripes on fruit flies. They know how striped patterns develop in these flies, and they know how genes are switched on in some stripes and switched off in other stripes. And they have discovered that signalling molecules called morphogens, which play an important role in cellular differentiation in the developing embryo, are also involved in developing the black pigmented spots seen on the wings of Drosophila guttifera, the leopard spotted fruit fly. This has caused them to speculate that similar processes are likely responsible for stripes and spots in other species. Like zebras.

Why does a zebra have stripes?

Again, there are several theories.   One is that the stripes help to confuse predators and biting insects when they (the zebras) are on the run.   It has to do with optical illusions.   Namely, as this article explains, striped patterns are well known for their ability to trick the eye. For example, a striped object may appear to be moving in a particular direction but in reality it’s moving in another direction altogether, or isn’t moving at all.   Like a wagon wheel at certain speeds appears to be turning in the opposite direction to what it actually is.   Or a turning barbers pole looks like it’s rising when in fact it’s stationary. Another theory that used to be popular is that the stripes are useful for camouflage, which is definitely the case with many other striped and spotty species. However, anyone who knows much about zebras agrees that they’re pretty noisy so camouflage stripes are unlikely to be of much benefit to them.

Whatever the reasons for their stripes, and just how they come about genetically, the fact remains that this very distinctive member of the Equidae family is one of the most eye catching mammals around. This may well be part of the reason why there are only 3 surviving species of zebras in existence today! Zebra hides are very popular, and the animals themselves were prized as trophies or killed off for food until there were only a fraction of the original numbers, and species, left. Today at least two of the 6 subspecies of Plains Zebra, both subspecies of Mountain Zebra, and the Grévy’s zebra, are endangered. Notably, Grévy’s zebra is critically endangered.

Telling Zebra Species By Their Stripes

When it comes to stripes, each species of zebra, and even the subspecies, can be differentiated by their stripes.   Some, like most of the Plains Zebra subspecies, have very broad stripes although one subspecies, Crawshay’s zebra, has much narrower stripes.

Grévy’s Zebra, a different species of zebra, has very narrow stripes in a dense pattern.  It also has a complete different pattern to the Plains Zebra subspecies.  It lacks stripes on the underbelly and if you look at the top of the rump, you can see the distinctive absence of stripes beside the dorsal stripe that runs down the spine.  This is unique to this species of zebra.  The Grevy’s Zebra is also more ‘ass’ like in appearance that the other species – it has rounder ears for example.

Mountain Zebras (2 subspecies) are a different species to the Plains and Grevy’s Zebras, and have stripes somewhere in between those 2 species.  They also lack the distinctive half and half pattern of the Plains Zebras, but unlike the Grevy’s Zebra stripe, still have the large horizontal stripes over the rump.  Both subspecies lack striping on the underbelly and they also have a flap of skin on the underside of their neck just behind the jaw called a dewlap.  Additionally, both subspecies have a grid iron pattern down their spine (dorsal stripe), which is different to the dorsal stripes of both the other zebra species.

These variations in stripes depend on when the genes that control pigment production in melanocytes got switched on. The broader the stripes, the earlier this happens.

So there you have it – how the zebra gets its very distinctive black and white hair.