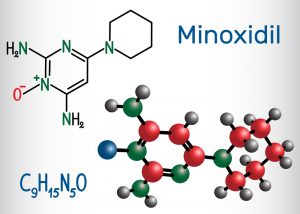 Rogaine or Minoxidil is a liquid or gel product that is applied topically to the scalp. It is recommended for use in helping stop pattern hair loss in both men and women. Minoxidil needs to be applied on a daily basis and long term to be effective.   Results become noticeable after around 6 months of consistent use.

Minoxidil is a vasodilator, meaning that it expands blood vessels, which in turn improves blood flow. This is significant for promoting healthy blood flow to and around hair follicles particularly hair follicles that are miniaturising due to androgenic alopecia. The product is further proven able to:

Minoxidil started life in the 1960’s as an oral antihypertensive drug and during clinical trials one of the interesting side effects noted in those taking the drug was improved hair growth.   The manufacturers (Upjohn) however were not interested in ‘fly by night’ hair loss remedies so dismissed it as a trifling side effect and kept it out of the spotlight. The industry at the time was rife with products claiming to be ‘miracle’ cures for hair loss and baldness and Upjohn, as a ‘serious’ pharmaceutical manufacturer and research company, didn’t want to be associated with such quackery.

Minoxidil though proved to be so extremely effective for treating hypertension, albeit with some nasty side effects (notably salt retention and tachycardia) that clinicians began to demand increasing access to it. This was despite the fact that it was still undergoing trials and development with respect to its side effects. The FDA rushed through an emergency approval in 1971 that allowed the drug to be used to treat seriously ill patients for periods not exceeding 2 weeks. Despite this, some clinicians allowed their patients to continue using it for longer periods and that’s when the issue of hairy side effects raised its head again.

Needless to say, as word spread about Minoxidil’s effects on hair growth, Upjohn was forced to reconsider their ‘disinterest’ in this aspect of their product. If they didn’t take its potential as a hair loss drug seriously, someone else would. The rest, as they say, is history. Subsequent tests revealed that topically applied Minoxidil could turn wispy vellus follicles into middle to terminal sized follicles and also preserve terminal follicles. When Minoxidil treatment stopped, follicle miniaturisation resumed but could be reversed again by restarting treatment.   Today Minoxidil under the brand name Rogaine is one of the most widely used and successful non-surgical hair loss treatments available. 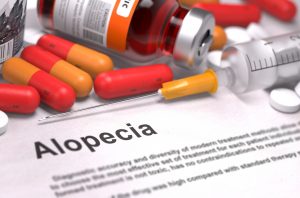 Finasteride, marketed under the brand name Propecia, is an oral medication suitable for treating MALE pattern hair loss only. It’s an antiandrogen or, more specifically, a 5-alpha reductase inhibitor. Antiandrogens are compounds that alter the way of androgens like testosterone and dihydrotestosterone (DHT) function. Androgens in turn are the hormones responsible for the development of male characteristics. Notably, and as the name indicates, 5-alpha-reductase inhibitors affect or ‘inhibit’ an enzyme called 5-alpha-reductase.

5-alpha-reductase is responsible for converting testosterone into DHT, a more potent hormone that is longer lasting and has a higher affinity for binding with some types of androgen receptors.   High levels of DHT are associated with health issues like prostate cancer and benign prostatic hyperplasia (BPH). Interestingly, Finasteride was originally developed as a drug for treating BPH and its ability to also inhibit pattern hair loss was discovered during trials. Researchers subsequently found that DHT is present in higher amounts in scalp and follicle tissue of men with androgenic alopecia (AGA) than in men without AGA.

Today we know that DHT has a high affinity for binding with hair follicles, much higher than testosterone. Body hair in men requires DHT to grow so this is understandable. However, scalp hair doesn’t need it; in fact DHT is proven to be detrimental to scalp hair growth but scalp hair follicles nonetheless still have androgen receptors. Those in some areas of the scalp have more of these receptors than other areas, and some people are genetically predisposed to have more androgen receptors generally than other people. (‘Some people’ incidentally is around 80% of Caucasian men and 50% of women!) DHT is able to bind to these receptors and when it does it causes the follicles to start shrinking, or miniaturising.

For a long time this process remained elusive but modern science is beginning to unravel the mystery. Individual follicle volume and hair diameter has been found to be directly proportionate to the volume and number of dermal papilla cells for that follicle.   The dermal papilla is hooked into the blood system and supplies the growing hair with essential nutrients.   Normally, dermal papilla cells are protected from abnormal cell death by an antiapoptotic protein called Bcl-2.   However, we also produce a pro-apoptotic protein called Bax, whose job it is to trigger cellular apoptosis.

To explain briefly – cells have a finite lifespan. They’re all scheduled to die off at some point, a process called apoptosis. However, this isn’t a haphazard arrangement! It’s a carefully regulated process with many inbuilt checks and balances. Bcl-2 and Bax are two of the proteins involved in this regulatory process.   Production of these proteins in turn is also regulated but sometimes things go ‘wrong’ and we produce more of one or the other than we should.

One of those times when things ‘go wrong’ is when there is too much DHT present, as is the case with androgenic alopecia affected scalp tissue. According to lab tests, too much DHT increases production of Bax, with a corresponding reduction in the protective benefits of Bcl-2. When this happens, it leaves the dermal papilla cells vulnerable to Bax’s pro-apoptotic actions. Not surprisingly, they start to die off prematurely, which causes the dermal papilla to miniaturise. The hair follicle volume correspondingly gets smaller, and the hairs produced by the follicle get increasingly thinner and weaker.

This miniaturisation of the dermal papilla also affects the hair growth cycle. Growth phases (anagen) get progressively shorter as the dermal papilla shrinks, and resting stages (telogen) progressively longer until the hairs barely get a chance to grow at all. As a result of all this, they revert to being vellus hairs, which are those super fine, ‘peach fuzz’ hairs that coat most of the rest of the body.

As a 5-alpha-reductase inhibitor, Finasteride is able to block the DHT creating enzyme and significantly reduce the amount of DHT being produced. The result is an increase in testosterone levels and a corresponding drop in DHT levels with flow on effects on scalp and follicle levels of DHT. When taken consistently, Finasteride keeps these levels down, thus preventing further follicle miniaturisation and alteration of hair growth cycles. It does however take several months before results are noticeable. 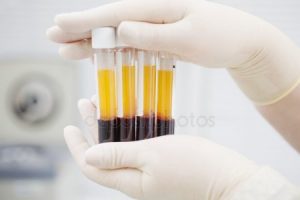 PRP therapy has been used for years to treat soft tissue sports injuries and also to help speed up healing times in cosmetic and plastic surgery. In recent times its use for treating hair loss has come to the fore and many clinics, including GetHair, now offer the treatment.

What are platelets and plasma?

Plasma is the liquid, and the largest, component in blood. The solid components – red blood cells, white blood cells, and platelets, are suspended in this liquid and transported throughout the body. Plasma itself is predominantly water, electrolytes, and proteins. Platelets, or thrombocytes, are an integral part of the body’s repair process. They’re vital for plugging up and repairing damaged blood vessels. They also contain an amazing array of growth factors that are essential for upregulating the cellular replication (mitosis) and regeneration needed for tissue repair generally, especially in connective tissues. Further to this, modern research has now identified immune system functions that involve platelets.

What is platelet-rich plasma?

Platelet-rich plasma is plasma that has had the red and white blood cells removed, leaving just the platelet component.   PRP is produced from the patient’s own blood. First, the blood is collected – how much depends on how much PRP is needed. After collection, the blood is separated into its constituent components using a centrifuge. The plasma heads to the top, red blood cells to the bottom. In between them is the buffy coat, a thin layer of white blood cells and platelets. This layer is carefully extracted and then further treated to separate the platelets from the white blood cells. Finally, what remains is a concentrated solution of platelets mixed with a small quantity of plasma. This is platelet-rich plasma.

How is PRP used in hair loss treatments?

Platelets are an essential part of the inflammation process that gets infection fighting white blood cells to sites of injury (like the scalp incisions produced during hair transplant surgery). This helps protect both the freshly transplanted follicles and the donor sites whilst they heal.   Further to this, platelets provide essential growth factors that trigger the repair process in surrounding skin, adipose, and vascular tissues. Providing additional platelets at these incision sites is proven to speed up these processes, thus reducing healing times.

Platelets carry hormones (growth factors) that stimulate hair regrowth. This helps superficial surface injuries (like hair transplant incisions) rapidly regrow hair once the skin has healed over.   These growth hormones in platelets can also be used to trigger an earlier start to the growth phase in a normal hair cycle and thus lengthen the growing time available to hairs.

Bcl-2 protects dermal papilla cells in hair follicles from premature cell death. Dihydrotestosterone on the other hand is proven to stimulate the production of Bax protein, a pro-apoptotic protein that contributes to the premature death of dermal papilla cells, and hence their miniaturisation. Therefore, PRP treatment in combination with Finasteride can significantly boost Bcl-2 levels whilst inhibiting DHL synthesis and Bax protein production.

So there you have it.  Three alternatives to hair transplant surgery that may be the solution to your hair loss situation!