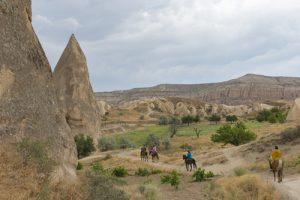 If you’re a horse lover and enjoy nothing more than hopping on a good horse and heading off into the wide blue yonder or a striking sunset, there are plenty of things to do and see in Turkey from the back of a horse. One of the regions noted not only for its beautiful horses but also its fascinating scenery, is the eye level view of Cappadocia. Whilst many tourists choose to view this surreal landscape from the air in a hot air balloon, more down to earth souls may prefer a more sedate mode of transport. One that has all 4 feet firmly planted on terra firma!   Cappadocia is thought to mean ‘land of beautiful horses’ so there’s really no more appropriate way to see this very unique region.

Over the centuries Cappadocia has been home to some of the finest horses, and horsemen, in the world. Which is hardly surprising as this is the part of the world from which the modern horse evolved. Although horses were originally native to the Americas, they are believed to have migrated to the Central Eurasian steppes some time before the rest of the species became extinct in the Americas. This extinction event happened some 11,000 years ago, around the end of the last Ice Age. Fortunately for the species, some of them survived in their new homeland and from them, equus as we know it today evolved.

Horses were also first domesticated in this area some 4000 years ago. Studies of modern equine haplotypes point to an original domestication event of around 80 odd mares and 5 or 6 stallions. Small numbers of mares and the odd stallion were added to the herds down the track but ultimately the rest of the species, and other related subtypes, became extinct in the wild. In 2006 there were an estimated 58,372,106 horses and ponies of varying breeds and types in the world. All of them descend from those original 80 odd mares and half dozen stallions! And many of their descendants can be found in Cappadocia, waiting to help you explore this fascinating area up close and personal.

Exploring Cappadocia on horseback provides you with opportunities to visit off the beaten track locations. The places that are just dots in the landscape when viewed from above in a hot air balloon. The places that tour buses and hire cars can’t get to. Indeed, the only other way to access some of these places is on foot and there are also plenty of hiking tours to choose from as well. From picturesque trails that wind their way through lush canyons and traverse the crests of some of those amazing formations, to visiting out of the way cave villages and soaking up the unspoiled areas that few tourists see, you can experience it all on the back of a horse.

Historically, Cappadocia is a culturally and religiously significant region, which may in part account for its local description as ‘the centre of the universe’! It’s also smack bang in the middle of the Anatolia plateau in central Turkey, which could be another reason. Cappadocia crosses the boundaries of 5 central Turkish provinces – Nevşehir, Aksaray, Kayseri, Kırsehir, and Niğde. A UNESCO World Heritage listed area, it’s also a place of spectacular, and unique, beauty with many unusual things to do and see. But probably the most exceptional thing about Cappadocia is its amazing geological structures, which you will be able to get a very close look at if you choose to trek through this area on horseback. As it is not a summer holiday destination, you can visit it after your hair transplant procedure with us.

The Creation Of A Fairytale Moonscape

Millions of years ago this area was covered in volcanic ash, lava and basalt that spewed from the nearby volcanoes Mt. Erciyes and Mt. Hasan. Over ensuing millennia, the ash compacted into an igneous rock called tuff littered with harder granite rocks and lava. Tuff is a fairly soft porous rock that is easily eroded by wind and rain and that’s exactly what has happened at Cappadocia, creating a landscape that is often, very appropriately, called a moonscape. The granite rocks and lava have sheltered some of the tuff from erosion, creating the weird and wonderful looking pinnacles, mushroom shaped pillars and pyramids that adorn the landscape. The most spectacular of these formations are around the towns of Ürgüp, Göreme, Uçhisar, Avanos and Mustafapaşa.

When humans moved into this area, they discovered they too could carve away at the soft porous tuff. They also found that by carving their dwellings into the rocks, they could avoid the searing heat in summer and freezing cold in winter. The temperature inside these places remains constant year round. Over the ensuing centuries minorities fleeing from persecution, like early Christians, were able to evade the Romans and later the Muslims by hiding underground. Eventually entire towns and cities were built this way, complete with some pretty amazing structures like huge underground churches and monasteries. Today window and holes peep out from amongst the outcrops, rocky hills and cliffs, marking the locations of dwellings and adding to the uniqueness that is Cappadocia.

The discovery in late 2014 of an ancient underground city in the vicinity of Göreme caused some major excitement in archaeological circles and could shed a lot of light on how early ‘settlers’ in this area lived. Unlike many of the other underground settlements that were used predominantly as temporary hiding places, there’s evidence that this city did support a permanent population.

The best of the underground cities currently open to the public are at Kaymakli and Derinkuyu.   These amazing places, some up to 8 levels deep, could hold thousands of people as well as livestock for months at a time as they hid from marauding Romans and Muslims. Others of significance include Özkonak and Gaziemir – this latter one has space for camels and is the only one of its kind in Cappadocia.

If you’ve opted for a more sedate way of exploring Cappadocia, most tours incorporate tourist towns like the pottery town of Avanos on the banks of Turkey’s longest river, the Kizilirmak. Göreme is famous for its fairy chimneys and is a major Cappadocia tourist attraction for this reason. Ortahisar is the site of a rock castle that draws many tourists each year whilst you’re offered some magnificent views of the Cappadocia valley from the rock castle at Uçhisar. Take a look at the cave dwellings and rock cones at Ürgüp and visit the region’s capital Nevsehir or the historic town of Güzelyurt near the Ihlara Valley.

In fact, fascinating though all these places are, the jewel in this part of Cappadocia has to be the Ihlara Valley itself, a 10-mile long (16 km) gorge gouged by water out of the volcanic rock. Ihlara Valley is Turkey’s most popular trekking and hiking destination for good reason. 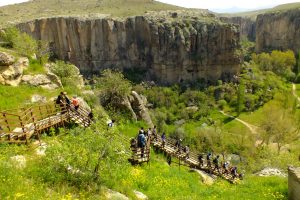 The place is spectacular and offers some incredible hikes and horseback treks. From the picturesque river with its waterfalls that flows along the bottom of the gorge and can be crossed via narrow bridges, to the soaring volcanic cliffs with ancient churches and homes carved into them, this is a must-see destination on any Cappadocia itinerary. At certain times of the year, the gorge also comes alive with the vibrant colours of autumn. The rest of the time it’s lushly green courtesy of the river running down the middle.

Another lovely valley to visit is Zelve. You can also take in the Open Air Museum here which features the old ghost town with all its cave dwellings. Güvercinlik (Pigeon) Valley is another valley that makes for a great hiking adventure. You can enjoy amazing views of the cliffs with their man-made caves and you also get to go through tunnels along the trail that have been carved into the volcanic rock. Then there’s the breathtakingly beautiful, lushly green Rose Valley and its namesake roses. However, Rose Valley is also very commercial with resorts and organized tours out into the surrounding countryside. But if organised and luxury is what you’re seeking, a visit to Rose Valley is just the thing.

For all that it looks very barren, Cappadocia is also a surprisingly fertile area. The volcanic soils are very rich and support a diverse agricultural industry. The area abounds with vineyards; historically it was one of the region’s prime wine producing areas. Many of these still exist today. But you’ll also find stone fruit like apricots growing here along with sugarcane, melons, pumpkins, beets and chickpeas.

So there you have it. If you’re visiting Turkey on your way to a hair transplant, why not take a few extra weeks and spend some time exploring this fascinating part the world that is Cappadocia. Whether you do it on horseback or by foot, in a hot air balloon or from the comfort of a tourist coach, it’ll be an experience you won’t forget in a hurry. However, we do advise doing it BEFORE your hair transplant. That way you can discuss what you’ve seen with our friendly surgeons before resting and recuperating after your surgery!