What is PRP &
Should You Support Your Hair Transplant with PRP?

PRP stands for Platelet-rich plasma. Platelets are a component in blood. They are colourless small cell fragments shaped like a disc. Platelets don’t have a nucleus and their primary role is helping to plug holes in blood vessels. But what is PRP made of?

Blood has 4 main components. Plasma is the largest of them. We tend to think of blood as being a liquid but the truth is that it’s the plasma that’s the liquid. Plasma makes up over half the volume of our blood (around 55%) and is predominantly made of water with proteins and electrolytes (dissolved salts). The other main components of blood are in fact solids and they are suspended within the plasma. Taken together, all these components make up blood.

After plasma, the next major component in blood is red blood cells (erythrocytes). Just under half (45%) the volume of our blood is made up of these. Red blood cells are what give blood its red colour. They carry oxygen around the body – our cells require oxygen as part of the cellular metabolism process. One of the by-products of this process is carbon dioxide, which is picked up by red blood cells as they drop off fresh oxygen molecules, and returned to the lungs for excretion.

White blood cells (leukocytes) are an integral part of the body’s immune system. They make antibodies, directly target and attack foreign substances (viruses, bacteria) that enter the body, kill off abnormal cells (tumours, cancers), and regulate the functions of other immune system cells.

And last but not least, the 4th major component of blood is thrombocytes, or platelets. These are the smallest components in blood in terms of size and they also make up less than 1% of blood by volume. As we’ve already mentioned, platelets are responsible for helping to plug up holes in blood vessels caused by injury. Not only does the resulting fibrin clot prevent us from losing more blood, it also provides a platform to support new tissue growth during the healing process.

How Is PRP Created?

When blood is spun at high speed its components separate. Plasma heads to the top, red blood cells to the bottom. In between these is a thin layer of platelets and white blood cells called the buffy coat. The buffy coat undergoes further treatment to separate the platelets from the white blood cells. If you’re interested in more information about this process, this article from the Blood Journal is a good start. Finally, what’s left is a platelet rich serum mixed with a little bit of plasma. This is Platelet-rich plasma or PRP. Usually it’s injected directly into the applicable sites. The blood to create Platelet-rich plasma for most procedures is usually taken from the person for whom it’s required.

PRP therapy has been used for some time to treat a range of conditions. One of its first uses was to promote faster healing after cosmetic surgical procedures. With its higher concentration of platelets than normal blood, PRP was found to be able to speed up healing time. PRP has also been used in non-surgical skin and facial rejuvenation procedures – you may have heard or seen it referred to as the vampire facial!

PRP has also been used to treat sports and soft tissue injuries to muscles, tendons and ligaments; to reduce inflammation in conditions like rheumatoid and osteoarthritis; and for treating chronic ulcers. 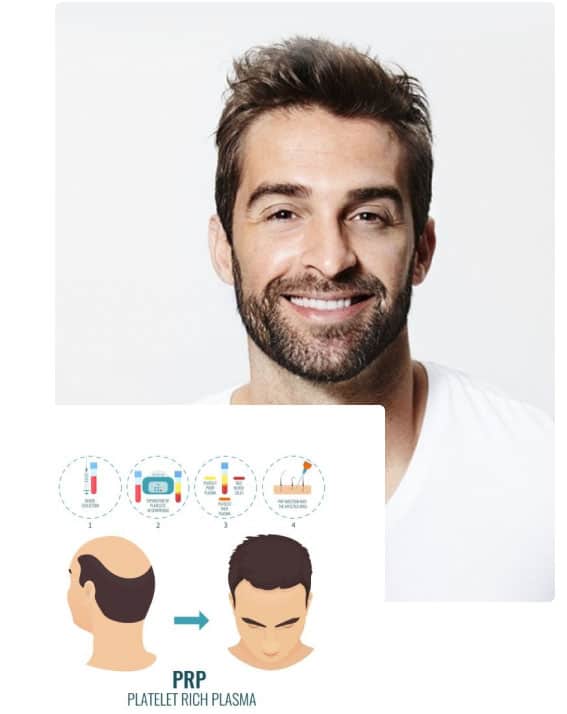 The Importance Of Platelets

What Are Growth Factors?

When platelets attach themselves to injured blood vessel tissues, they release growth hormone. The growth hormone molecules stimulate connective tissue cells at the site of the injury to begin replicating themselves, a process called mitosis. This replication produces the new tissue growth that eventually heals the wound. 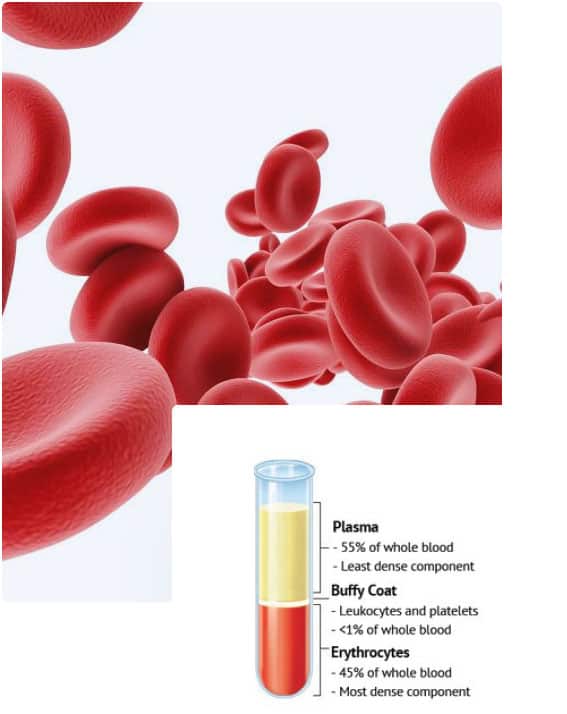 Why do we have substances that promote inflammation? This does seem to be somewhat counter productive until you consider what inflammation actually is…. Inflammation happens when the immune system picks up the presence of a foreign substance in the body. It dispatches a range of immune system chemicals and cells that are designed to attack, kill or disable the intruder. Neutrophils, the body’s first line of defence, are a type of white blood cell and are first on the scene.

Along with neutrophils, these immune system substances and cells are transported to the site of the invasion via the blood and it’s this increased influx of blood that causes the heat, swelling and redness typical of inflammation.

So inflammation in and of itself is an important part of our immune system response. It’s designed to get more of our immune system fighter cells to the site of an invasion. The role of our proinflammatory cytokines is to increase that response! It’s when this immune response gets out of hand that inflammatory disorders like cystic fibrosis, and the various autoimmune diseases, happen.

The Link Between Inflammation And Platelets

Back in 2007 a group of scientists at the Max Delbrueck Center for Molecular Medicine in Berlin discovered that platelets also play a role in inflammation. Prior to this it was thought their role was primarily limited to blood clotting. However, the researchers found that platelets could provide neutrophils with additional receptors for producing the proinflammatory cytokine tumor necrosis factor (TNF).

As we mentioned previously, when a foreign substance is detected neutrophils are the first ‘soldiers’ to arrive at the scene. This is why the PRP was mostly used for treating injuries. They engulf, attack and destroy the invader along with any dead tissue cells at the site. At the same time, receptor cells in the membranes of the neutrophils bind to specific types of chemicals that instruct the neutrophils to produce proinflammatory cytokines like Tumor necrosis factor (TNF). TNF’s primary role is to activate two other types of white blood cells – macrophages and lymphocytes. When these white blood cells receive the TNF signal, they come to the aid of the neutrophils and join forces to attack foreign bodies like bacteria.
The 2007 research found that neutrophils could also acquire additional receptor molecules from platelets. The platelets release the receptors, called GPIIb/IIIa, in packages called microparticles. The microparticles bind to the surface of the neutrophils and release their content of receptor molecules. These molecules subsequently get incorporated into the outer membrane of the neutrophils and can then stimulate the neutrophil to produce TNF. The research also found that some of the receptors involved in the blood clotting process can set off an inflammatory reaction too. 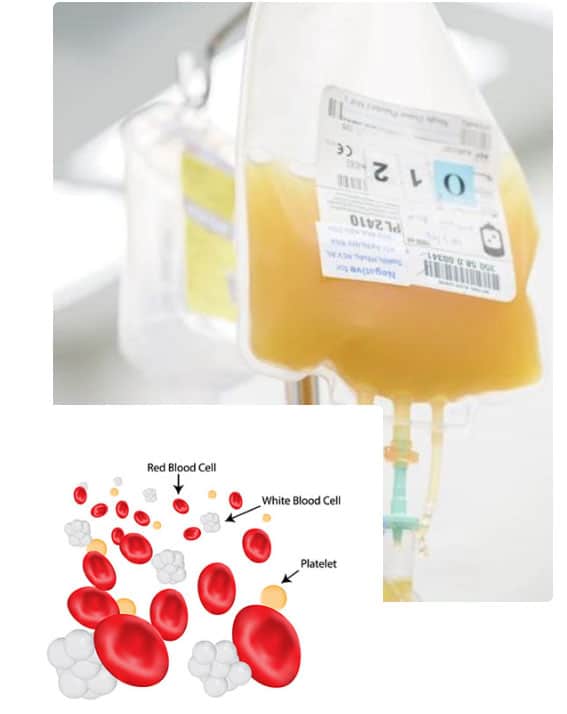 When it comes to fighting bacteria and pathogens, and protecting the hair follicles, this inflammatory response is a good thing. It’s particularly important after hair transplant surgery when the lesions left from both the removal and implanting of hair follicles are fresh. The increased white blood cells and platelets at the incision sites help to protect them from infection during the healing process.

This research further found that artificially increasing the availability of platelets at trauma sites like hair transplant lesions speeds up recovery and new tissue growth by increasing the availability of growth factors like PDGF-BB and VEGF. This is significant for the following reason. At GetHair, we do one PRP session for free in every hair transplant procedure in Turkey.

Studies show that PDGF- BB triggers mitosis in adipose tissue stem cells. Adipose tissue is fatty connective tissue and there is a layer of it (the hypodermis) directly underneath the dermis. The dermis is the tough second layer of your skin. The outer protective layer that faces the elements is the epidermis. 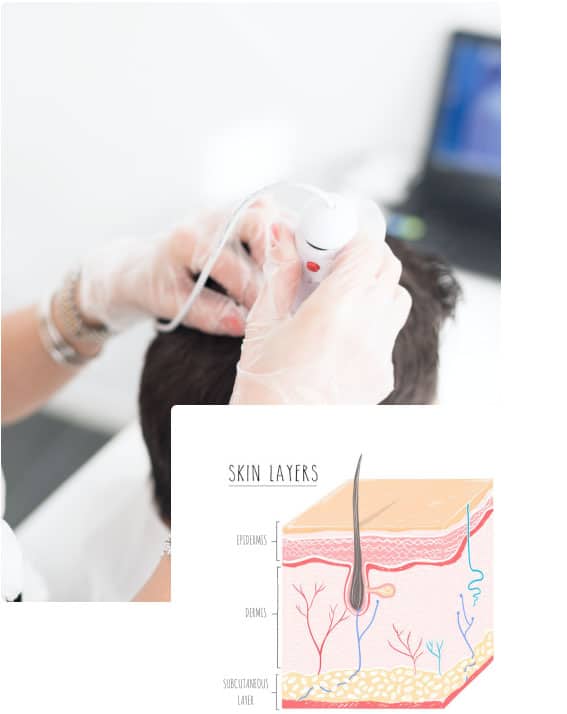 When the skin is cut or damaged and bleeds, platelets attach themselves to the damaged blood vessel and skin tissue, and release growth hormones. PDGF- BB trigger mitosis (cell division) in the fatty tissue, which upregulates the connective skin tissue healing process. VEGF (vascular endothelial growth factor) does something similar with vascular tissue and the various other growth factors also do their bit. Before you know it, everything has healed up nicely.

Further to this, platelets also contain hormone molecules that stimulate hair growth. This makes sense when you think about it. When our skin is injured, there are usually hair follicles affected. Sometimes these hair follicles are killed off and leave a permanent hairless scar. Other times the hair simply re-grows over the newly mended tissue, undoubtedly aided by the hair growth promoting factors in our platelets. Hair regrowth over superficial skin wounds is very commonly observed in mammals. Humans are, when all is said and done, mammals. So like our fellow mammals we’ve been provided with an inbuilt way of ensuring our protective hair covering re-grows after trauma. 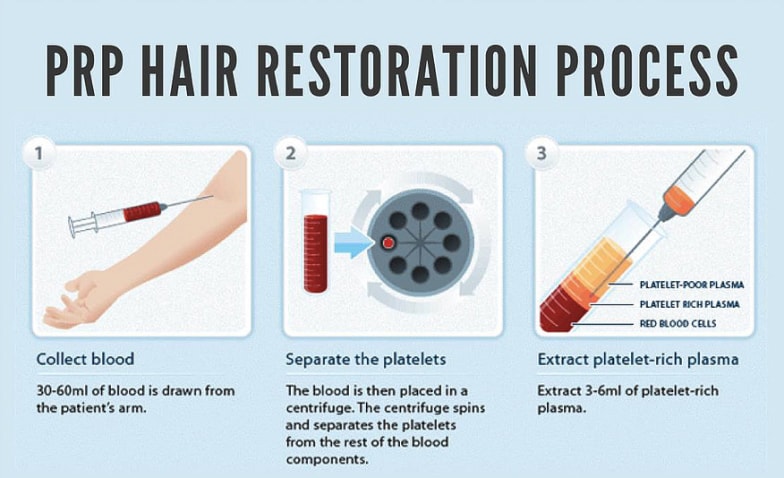 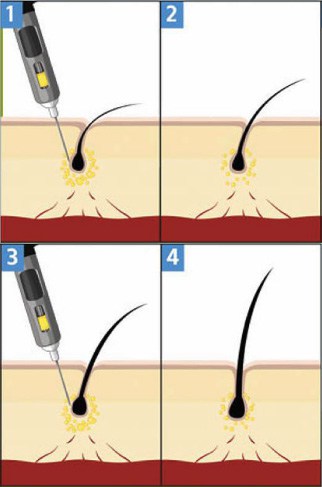 In addition to their ability to stimulate tissue repair, platelets also have antiapoptotic properties. Apoptotic or apoptosis is programmed cell death. It’s perfectly normal and a regular part of cellular turnover and regeneration. However, when it happens prematurely or not according to program it isn’t a good thing. Premature hair loss is a case in point. We’ve explained the normal hair growth cycle in this article.

When hair prematurely enters the telogen phase it increases the amount of hair being lost at a given time, which is not normal. With conditions like androgenic alopecia the growth or anagen phase progressively shortens, leaving hairs less time to grow until eventually the phase is so short the hair shaft barely has time to grow beyond the surface of the skin. The result is increasing baldness.

Platelets, Apoptosis And The Dermal Papilla

It’s been found that platelets can activate and upregulate these antiapoptotic proteins, thus protecting cells and preventing abnormal cell death. For hair loss, the implications of this are significant. According to this research, dermal papilla cells are amongst those cells usually protected from cellular apoptosis by high levels of the antiapoptotic protein Bcl-2. Which is a good thing because without dermal papilla cells (DPC) you can’t grow new hairs.

The dermal papilla plays a pivotal role in the dermal and epidermal interactions that happen during the hair growth cycle. It’s the dermal papilla that is hooked up to the blood system and supplies the growing hair with nutrients. Research has found that the volume and diameter of hair and hair follicles directly correlate with the number and volume of dermal papilla cells for that follicle. Which is significant for hair loss like that caused by androgenic alopecia.

Androgenic hormones control hair growth and under normal circumstances they do a pretty good job of it. Under certain conditions however they begin to inhibit hair growth and cause the miniaturisation of hair follicles. One of the ways they do this is by inducing abnormal apoptosis in the dermal papilla cells.

Normally, dermal papilla cells are safeguarded by antiapoptotic protein Bcl-2 but excessive amounts of testosterone and 5a-DHT have been shown in laboratory tests to increase levels of the pro-apoptotic protein Bax. This has the effect of reducing the protective benefits of Bcl-2, thereby making dermal papilla cells more susceptible to apoptosis. And as these cells die off the dermal papilla miniaturises with a corresponding miniaturisation in hair size and strength. It also reduces the length of the anagen (growth) phase of the hair cycle. There is a great explanation of Bax and Bak proteins and their role in apoptosis here. 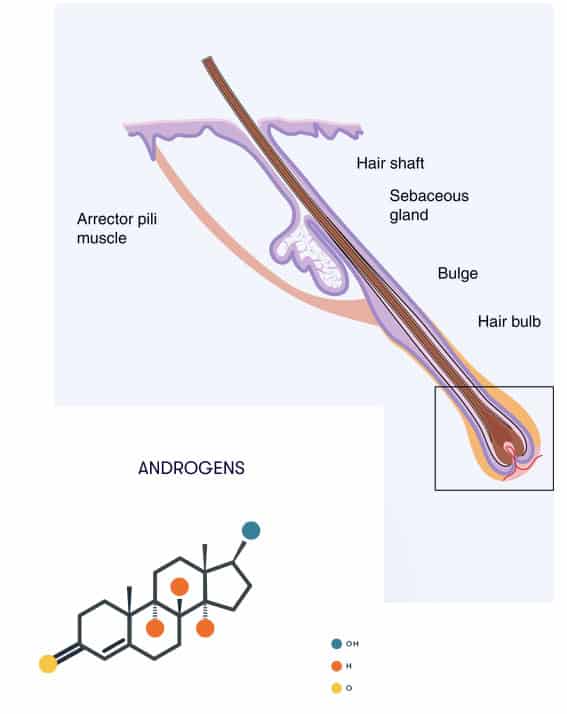 Platelets, Apoptosis And The Dermal Papilla

PRP treatment has been shown to improve hair regrowth in several ways.

Other reports like the following indicate that PRP therapy is a good treatment both for hair loss and for speeding up healing after hair transplants due to a number of beneficial compounds released by platelets during their tissue repair activities.